PEUGEOT 205 5 likes 1075 views
The arrival of the new Peugeot 205 GTI 1.9 litre was greeted by the motoring press as positively as the previous version.

Although there are barely two years between the launch of two very similar cars, which differ essentially in their engines, most of the specialist magazines once again give extensive coverage to the latest car from the lion brand. As before, exclusive or preview tests were completed by comparisons with the 205 GTI's competitors.

In the 1980's, the automobile press was flourishing with weekly publications such as Auto Hebdo, fortnightly titles such as L'Auto-Journal or long-standing monthly magazines such as Sport Auto, L'Automobile Magazine or Échappement to name but a few. The arrival of the Peugeot 205 GTI 1.6 in 1984, then the 1.9 two years later, is an inexhaustible subject for all these publications which never tire of writing about the glory of the little French sports bomb. The 205 GTI will always be praised in tests carried out by the most experienced and recognised journalists in the automotive press. 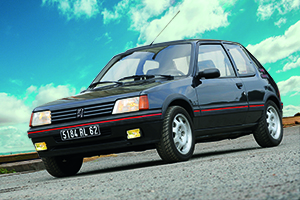 The second version of the Peugeot 205 GTI was a real success in terms of style and performance, which did not fail to inflame the press at the time.

The idea that frequently emerges in the articles dedicated to the release of the 205 GTI 1.9 is that this model is new of course, but that it is in the perfect continuity and spirit of the previous one: the 1.6 version that revolutionised the world of small sports cars. The tests and articles will be less numerous than for its predecessor, but often even more laudatory, the car having gained in engine power and therefore in performance! The first title to mention the improved version of the 205 GTI was Auto Hebdo which devoted a 3-page article to it, signed by Christophe Bonnaud, in its issue of 12 December 1985, i.e. ten months before its official presentation at the Paris Show in October 1986. There are no photos of the car, but an interpretation drawing by R. Demarets which also appears on the cover with the headline "Plus musclée Plus féroce". After asking whether the new GTI is an evolution or a revolution, the journalist concludes his article as follows: "Just think that three years ago, the sporty version of a mini saloon car at Peugeot was called 104 ZS...". 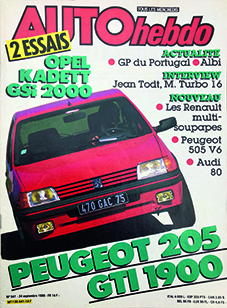 Praise for the tests

The monthly magazine Sport Auto is full of praise for Peugeot Sport's latest car, especially when the tests are entrusted to José Rosinski, one of the finest writers in the business who also has experience of competition at the highest level. His opinions are always precise and relevant, so when he reports on his tests of the 205 GTI 1.9, the cause is clear: he loves this car! When the new 205 GTI was launched, the journalist shared his enthusiasm for this car on two occasions, in the October and December 1986 issues. The first article published in n°297 is a match between the 205 and three rivals over 13 pages in which the praise follows one another. He underlines the technical innovations, such as the brakes: "Irreproachable brakes. In fact, they even amazed us, not only by their power, but by their endurance, which seems quite simply impossible to break. To conclude his article thus: "Peugeot gave us an impeccable copy. Of our four "supercharged" cars, the 205 GTI 1.9 is by far the most energetic, the sportiest, the one that will give you the most pleasure. It is irresistible! What more can be said...

For the monthly magazine Sport Auto number 297 of October 1986, the 205 GTI 1.9 will be one of the stars of the next Paris Motor Show which will open its doors.

Queen of the comparisons

Every time the Peugeot 205 GTI 1.9 appears in a comparison with vehicles in its category, it comes out on top. In the match between it and the Renault 5 GT Turbo published in the December 1986 issue of Sport Auto, the Peugeot 205 GTI had the upper hand in terms of performance, handling, fuel consumption and style, while its competitor beat it for suspension comfort and price. After a first test of the 115 hp version in February 1986, L'Automobile Magazine offered a comparison between four small GTIs in its popular Salon Special issue the following October. Throughout the nine pages of tests, the author Pierre-François Rousselot underlined the qualities that made the Peugeot win hands down against the Opel Kadett GSI, the VW Golf GTI 16 and the Ford Escort RS Turbo: "... power and user-friendliness are, at last, unequivocally present. Never before has a 205 GTI made such a positive impression on me, so much so that one can regret the lack of distinction with the old version. Several years later, it still holds the top spot, as in Auto Plus in June 1989, where it beats 11 other cars among the most performing of the moment.

GTI! This acronym for sporty driving was to grace the pages of car magazines for many years.

More than three decades after its launch, the Peugeot 205 GTI 1.9 is still the talk of the town and is still a point of comparison for the sports models that have succeeded it in the Sochaux-based manufacturer's catalogues. But in the meantime, the world of the press has evolved and it is now on the web that many articles are devoted to it. Thus, as early as May 2013, the website of L'Automobile Magazine offered a whole page of comparisons between the 205 GTI 1.9 litre and the latest 208 GTI launched a little earlier. Equipped with a turbo engine of "only" 1,598 cm3, the latter develops 78 bhp more than its predecessor and reaches a top speed of 230 km/h (compared to 206 km/h).

In its October 12, 1988 issue, the weekly Auto Plus opens its pages to the international driver Jean-Pierre Beltoise who makes a comparative test between two French sports bombs of the moment, the Renault 5 GT Turbo and the Peugeot 205 GTI 1.9 Litre. For him, the 205 is seduction and elegance and if it is more expensive than its competitor, it is like some fashionable clothes, appearances are sometimes worth the extra price! He describes an efficient and sharp behaviour that will require the driver to have some driving experience. Further on, he writes that the 205 GTI is probably the best model ever marketed by Peugeot and that it outperforms most of its rivals thanks to its race car-like performance.