The one who made it all happen

Designed in 1948, the 356 is the first model of the Porsche brand. The philosophy of simplicity and perfectionism makes the 356 successful.

Paradoxically, the 356 is the last car in which the brand's founder, Ferdinand Porsche, took part, but it is the first to bear its name. Derived from its predecessor, the popular Volkswagen, the Porsche 356 is at the start of a series of legendary sports cars, including the 911. The 356 is shaping the reputation of the Stuttgart manufacturer.

Seven decades later, the characteristics of the 356 are immediately recognizable and have become symbolic of Porsche, after many developments and variations, the basis can still be found in the current models of the brand. In the 1930s, Ferry Porsche, while head of the design office on the KdF Volkswagen project, dreamed of building a sports car that would bear his name. Long passionate about driving, he sees the car as more than just a means of transport, and since he is perfectly familiar with the structure and mechanics of the Volkswagen, he suspects he could design one in a sporty version. The first drawings of a model of this type appeared in 1939 and served as the basis for Porsche Study No. 356.

About one third of the Porsche 356 will be produced in a convertible version (Cabriolet, Roadster, Speedster). © IXO Collections SAS - Tous droits réservés. Crédits photo © Porsche

Ferry Porsche's goal with the 356 is to build a good car for his own pleasure. At the time, however, it became clear that there were many who wanted to buy this type of sports car and Ferry Porsche would make sure they were satisfied by offering them a high-quality and qualitative model that we control more than we drive. The project became relevant again in June 1947, under code 356 in the internal numbering system set up by the Porsche Design Office.

The model is not the 356th study on this list, but the 349th. The design office is located in Gmünd in Austria. The first example was released on June 8, 1948, but prior to March the chassis had already been tested without bodywork. The 356 was presented to the press on July 3 at the Bern-Bremgarten circuit for the opening of the Swiss Grand Prix. It is a convertible designed by Erwin Kommenda built in the workshop of Friederich Weber and consisting of an aluminum body mounted on a tubular frame. This expensive technique was abandoned a few months later in favour of a welded steel body shell with the code 356/2 and equipped with the Volkswagen engine pushed to 40 hp.

Given the success of his racing car, Ferry Porsche considered producing it in small series. The first 46 units (consisting of 23 convertibles, of which 6 bodyworks produced by Beutler in Switzerland) are built in the Gmünd factory in a traditional way. In March 1949, both the new brand "Porsche Konstruktions GmbH" and the 356 were officially presented to the public at the Geneva Motor Show, that immediately resulted in many orders. After being temporarily housed at the coachbuilder Reutter in Stuttgart, Porsche returns to its original building in Zuffenhausen in April 1950, where real mass production could finally begin. The milestone of 500 units produced was passed in March 1951 and the 10,000th Porsche 356 left the factory five years later! On April 28, 1965, when the last Porsche 356 left the Zuffenhausen site, no fewer than 79,218 units were built, all versions combined.

One of the 356's great successes is the Tour de Corse in 1960, won by Paul Ernst Strähle and Herbert Linge (here on the right) with their Carrera. © IXO Collections SAS - Tous droits réservés. Crédits photo © Archives & Collections Dominique Pascal

The first 356's are distinguished by their two-piece windshield called "Split-Window", until June 1952 the windshield will be mounted in this way. The only engine initially proposed is the 1,100 cm3 with 35 hp, which from 1951 is supported by a 1,300 cm3 (44 hp) as well as a 1,500 cm3 (60 hp). The power of the latter two will only increase until they reach 60 and 110 l respectively at the end of development. In 1955 a 1600 cc 60 hp appeared and a 2 liter 130 hp version in 1962. All these engines share their "Boxer" architecture (4 cylinders opposite flat) and their original forced air cooling that comes directly from the Volkswagen Beetle. The most powerful engines, intended for the GS alias Carrera versions, are prepared by engineer Ernst Fuhrmann. The various developments of the Porsche 356 are divided into 4 generations, consisting of the versions Coupé, Cabriolet, Roadster (1952), Speedster (1954) and a Hard-Top Coupé (1960) produced by the body builder Karman. The Type 356 A appeared in 1955 with a more refined body, so that the models produced before that date would be called "Pre-A". The Type 356 B was released in 1959, followed by the Type 356 C in 1963. 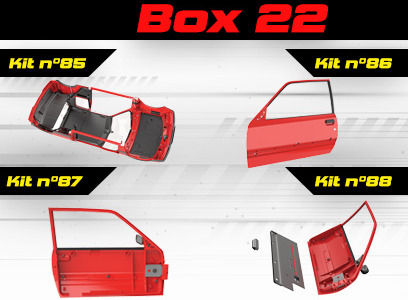 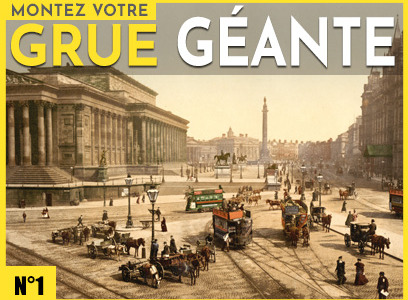 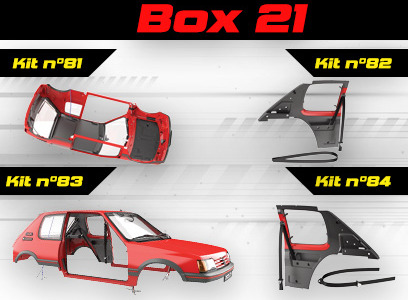 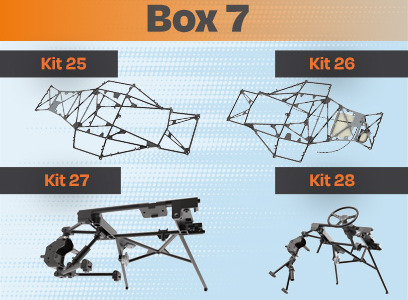