PEUGEOT 205 16 likes 6092 views
In 1984, Peugeot-Talbot Sport entered the World Rally Championship with its 205 Turbo 16, which had just been homologated in Group B by the FIA.

From the very first events in which it participated in 1984, the Peugeot 205 Turbo 16 was victorious on all types of terrain. The Evolution 2, which appeared the following season, made a major contribution to Peugeot's success in the 1985 World Rally Championship and enabled it to repeat the feat in 1986. At the end of the same year, a "Grand Raid" version was unveiled to compete in the Paris-Dakar rally.

In 1984, for its first participation in the World Rally Championship, the Peugeot 205 Turbo 16 was only entered in some test events, as Peugeot Talbot Sport only considered this season as a learning period. But the performance of the car was far beyond the expectations of the Peugeot Talbot Sport team and Ari Vatanen took three magnificent victories in the Mille Lacs Rally, San Remo and the RAC Rally. In just a few races, Peugeot had completely dominated its rivals and covered itself in glory. A new page was turned: from now on, the 205 Turbo 16 would be the reference car for the future of rallying.

The PTS team at the 1985 Monte Carlo, with winner Ari Vatanen (2nd from left) and co-driver Terry Harryman on his right, while Jean Todt is on the right in the photo.

Peugeot Talbot's competition department, based in Boulogne near Paris, was headed at the time by Jean Todt, a former rally co-driver, while André De Cortanze was responsible for the technical department, assisted by two engineers: Jean-Claude Vaucard (structure and chassis) and Jean-Pierre Boudy (engine). The 1985 championship was to be a very competitive one, with the arrival of the latest Lancia 037 and a new version of the Audi Quattro. At Peugeot, Vatanen's successive victories at the end of the previous season forced him to speed up the development of a more powerful version, the Evolution 2. But its homologation was only scheduled for the Tour of Corsica, a third of the way through the season, and the first races of 1985 were run with a car that had received few improvements. The team underwent some changes with the arrival of drivers Timo Salonen (ex Nissan) and Bruno Saby (ex Renault) to support Ari Vatanen, promoted to first driver. At the same time, former driver Jean-Pierre Nicolas became Jean Todt's right-hand man. 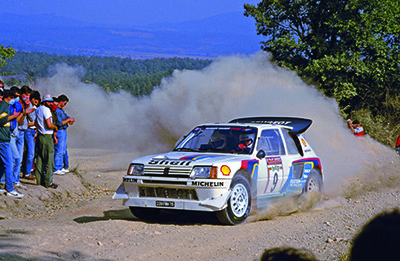 Bruno Saby and his co-driver Jean-François Fauchille on the rocky tracks of the 1986 San Remo Rally where their car will be out of the race for technical reasons.

The season opened with a bang for the French manufacturer as Vatanen won the Monte Carlo, considered to be the most prestigious of international rallies. The victory of the Peugeot 205 T16 at the start of the World Championship was the first of many that year. Ari Vatanen and his co-driver Terry Harryman won the following rally in Sweden, then Timo Salonen, driven by Seppo Hajanne, won in Portugal, the Acropolis, New Zealand, Argentina and the 1000 Lakes. In the final standings, Peugeot Sport was crowned Manufacturers' World Champion with 142 points, ahead of Audi (126 points) and Lancia (70 points). In the Drivers' Championship, Timo Salonen finished first with 127 points ahead of Sweden's Stig Blomqvist (Audi) and Germany's Walter Röhrl (Audi). With a total of 7 victories in the 12 rounds of the Championship, Peugeot left only a few crumbs to its rivals during this memorable season. Toyota won the Rallye de Côte d'Ivoire and the Safari Rally, Audi the San Remo Rally and Renault won the Tour de Corse.

The 205 Turbo 16 Evolution 2, which appeared in the 1985 Tour de Corse, was distinguished by its large rear wing, which gave it remarkable aerodynamic support.

For 1986, the competition from the Peugeots had changed: Lancia was now its main adversary after the defection of the Audi Quattros. It was Lancia that opened the hostilities with the victory of the Toivonen-Cresto team in Monte Carlo. In the following rally, in Sweden, Kankkunen, the new recruit of PTS, replied by winning his 205 Turbo 16 Evo 2. The next two rounds, Portugal and the Safary Rally, were won respectively by the Renault 5 Turbo of Moutinho-Fortes and the Toyota Celica of Valdeggard-Gallagher, which augured well for an open and balanced season. Until the tragic death of Henri Toivonen in the Tour of Corsica, which called into question the participation of Group B cars in the World Championship. Peugeot ended the season with four more victories in Greece, New Zealand, Finland and Great Britain and won another title. After the banning of Group B cars from the World Championship, Peugeot decided to enter the 205 Turbo 16 in Rally Raid events which remained open to this category. The first attempt at the 1987 Paris-Dakar was a master stroke, with Vatanen and Giroux winning. The following July, Vatanen came second in the prestigious Pikes Peak hill climb in the USA. In 1988, the Turbo 16 won the Paris-Dakar again with the Kankkunen-Pironen team. Other major international successes for the 205 T16 include the European Rallycross Championship, which it won four times between 1987 and 1990.

The Vatanen-Harryman team on their way to victory in the 1985 Rally Sweden in the first version of the 205 Turbo 16.

Champions from the cold

A fabulous record of achievement

From August 1984 to August 1986, the Peugeot 205 Turbo 16 built up a breathtaking record of achievements and became the undisputed queen of rallies. After its first success at the 1,000 Lakes in 1984, it won the San Remo and the RAC Rally, and then began 1985 with victories in Monte Carlo, Sweden and Portugal, i.e. six consecutive victories, unheard of at the time! This was followed by ten more victories during that year and in 1986: these victories enabled Peugeot to win two manufacturers' titles in a row, while Timo Salonen and Juha Kankkunen took the drivers' titles in 1985 and 1986 respectively. In total, the 205 Turbo 16 won sixteen events in the World Rally Championship.