PEUGEOT 205 16 likes 4912 views
An emblematic figure in Scandinavian rallying, this Finn is one of the most brilliant drivers of his generation. He spent a large part of his career driving for Peugeot in the 205 T16.

Ari Vatanen was born on 27 April 1952 in Tuupovaara, in the east of Finland. Like many young Scandinavians, he started to enjoy the joys of sliding on the many frozen lakes in winter in these regions. Years later, this experience would prove to be an invaluable asset in snowy events, such as the 1985 Monte Carlo Rally, where he won masterfully after a fantastic run on the icy roads.

In a career spanning more than three decades, Ari Vatanen has built up an impressive record of achievements. Of the 185 official rallies he has competed in (110 of which count for the World Championship), he has won 35 of them, not to mention his 4 victories in the Paris-Dakar Rally and his unforgettable climb up the Pike's Peak hillclimb in Colorado in 1988 with the Peugeot 405 T16. That day, despite the track being made difficult by a hailstorm, he put on a sliding festival and smashed the record set by Walter Rörhl the previous year.

He did not yet have his driving licence when he started in small regional rallies with an Opel Ascona. In 1971, he started his professional career in the Hanki Rally and two years later, Vatanen scored his first scratch victory in the Savo Rally. His strong performances brought him to the attention of the Finnish driver Hannu Mikkola. After a first rally outside his home country in 1975 (Welsh), he was given an official Ford the following year to compete in the British Rally Championship, which he won twice (Welsh and Manx). This title opened the doors to international fame, but he was also pursued by a bad reputation as a "hothead" who went off the road more often than he finished his races... Over the next two seasons, Ari Vatanen won four rallies, the Artic and Scottish in 1977 and the Artic and Donnegal in 1978. In 1980, he won his first World Championship event, the Acropolis, with Dave Richards in a Ford Escort RS 1800 and finished 4th in the Championship. In 1981, he won the Brazil, Acropolis and 1000 Lakes Rallies, again with Richards in a Ford Escort and became World Champion ahead of Guy Fréquelin and Hannu Mikkola.

In 1987, Ari Vatanen won the first of his four Paris-Dakar Rally victories in the Peugeot 205 Grand Raid.

He then competed in the 1982 and 1983 World Championships in an Opel Ascona 400, driven by Terry Harryman, and won the Safari Rally in 1983. Jean Todt signed him up to the Peugeot Talbot Sport team for 1984 and at the wheel of the Group B 205 Turbo 16, he won the San Remo 1000 Lakes Rally and the RAC Rally, finishing 4th in the World Championship. Vatanen was now at the highest level of his career and in 1985, in his second season with Peugeot, he won the Monte Carlo and the Rally of Sweden before a near death experience on the Rally of Argentina, which kept him away from racing for 18 months. In 1987, he was contacted again Peugeot, which had started rally-raids after the banning of Group B cars. In partnership with Bernard Giroux, he won the Paris-Dakar, then the Pharaons Rally with Bruno Berglund on the 205 Grand Raid. He won the Paris-Dakar from 1989 to 1991 on the Peugeot 405 T16, still with Berglund. 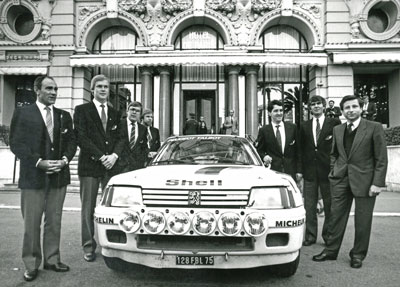 The Peugeot Talbot Sport team around the 205 Turbo 16 during the presentation of the 1985 Monte-Carlo where Vatanen and Harryman (on his right) will triumph.

After a few rally-raids with Citroën (1st in the Baja and Pharaons in 1991), Vatanen made his comeback in the World Championship in the official Subaru team managed by his former co-driver Dave Richards. He scored some good results: 2nd in the RAC in 1992, 2nd in the 1000 Lakes and in Australia in 1993 before joining the Ford team the following year (3rd in Argentina). At the same time, he continued to compete in rally-raids on Citroën ZXs (1st in the Atlas in 1995 and 1997, and in the Baja in 1996 and 1997) and won the World Cup in this discipline in 1997. The following year, he still competed occasionally in the WRC (World Rally Championship) in Ford and Subaru cars before deciding to hang up his helmet for good. Once he retired from competition, he was able to devote himself to politics, a field that had long interested him. Living since 1990 in Rognes, near Aix-en-Provence where he owns a vineyard, Ari Vatanen was elected to the European Parliament on the Finnish party list in 1999, then on the French party list (UMP) in 2004. He made an episodic return to rally-raid in 2003 with the official Nissan Motorsport team and finished 7th in the Dakar. In 2007, he participated again in this event in a Volkswagen Race Touareg 2. Since then, he has regularly competed in historic vehicle races.

At the 1984 1000 Lakes Rally, Vatanen won his first World Championship rally back home in Finland.

For as long as there has been rallying, Nordic drivers have had a reputation for agility, especially on snowy and icy tracks. Their unrivalled driving skills have enabled them to regularly win the World Rally Championship. Among Ari Vatanen's Finnish compatriots, several have become World Champions such as Markku Alén (1978), Hannu Mikkola (1983), Timo Salonen (1985), Juha Kankkunen (1986, 1987, 1991 and 1993), Tomi Mäkinen (1996 to 1999) and finally Markus Grönholm (2000 and 2002). Their Swedish neighbours have also won the world crown several times: Björn Waldegaard in 1979, Stig Blomqvist in 1984 and more recently Petter Solberg in 2003.

The end of his career

During the second special stage of the 1985 Rally Argentina, held from 30 July to 3 August, Ari Vatanen was involved in a serious accident in his Peugeot 205 Turbo 16 while leading the race. After a series of spectacular rollovers, the car was totally destroyed and although his co-driver Terry Harryman was only slightly injured, the Finnish driver was seriously injured, to the point where the most alarming diagnoses were made. After a convalescence of more than a year and a half, Vatanen decided not to drive in the World Rally Championship. But when his old friend Jean Todt, the sporting director of Peugeot Talbot Sport, contacted him again in 1987 to compete in rally-raids, including the Paris-Dakar, he was convinced...