PEUGEOT 205 12 likes 3865 views
After a successful career in sport, Jean Todt used his organisational and strategic skills to work for Peugeot Talbot Sport and then Ferrari before taking over the helm of the world's highest motoring body, the FIA.

His training at the École des Cadres in Paris and his experience as a navigator in international rally events would later enable Jean Todt to achieve great things when he was offered to manage leading racing teams such as Peugeot Talbot Sport and Scuderia Ferrari. He was unanimously recognised for his rigour, his determination to win, and his ability to manage a technical team and champions.

Jean-Henri Todt was born on 25 February 1946 in Pierrefort, in the Cantal region. He began competing in motor racing in 1966, at the Rallye International de Picardie, as co-driver of Henri Lemarchand in an NSU. He scored his first victory in the 1968 Lyon-Charbonnières Rally, with Jean-Claude Andruet in an Alpine A110, and then tried to get behind the wheel without much success. It was as a navigator for the great international drivers of the time that he made a name for himself: Jean-Pierre Nicolas, Ove Andersson, Hannu Mikkola, Timo Mäkinen, Guy Fréquelin... With the latter, aboard the Talbot Sunbeam Lotus, he enabled the Talbot team to be crowned World Champion in 1981.

From 1993 to 2007, Jean Todt led the prestigious Scuderia Ferrari, which won the F1 Constructors' World Championship eight times during this period.

On 9 October 1981, after having definitively stopped his career as a co-driver, Jean Todt was appointed to the management of Peugeot Talbot Sport (PTS). The French group's sporting activities were mainly focused on rallies. In 1982, Todt launched the Group B project and the Peugeot 205 Turbo 16 was the tool. It dominated its rivals for three seasons, winning 16 races and the World Championship in 1985 and 1986. Jean Todt and his team then tackled the Rally Raids and here again the organisation put in place enabled the 405 Turbo 16 to win outrageously, with in particular four consecutive victories in the Paris-Dakar Rally from 1987 to 1990 as well as Vatanen's success in the famous Pikes Peak race in 1988. At the end of 1987, the World Sports Prototype Championship was relaunched and Jean Todt found an excellent opportunity to set new objectives with the new Peugeot 905. In four seasons, from 1990 to 1994, this technically advanced car won nine championship races, including the Le Mans 24 Hours in 1992 and 1993. In addition, Peugeot won the World Sports Car Championship in 1992, while Yannick Dalmas and Derek Warwick were jointly crowned World Drivers' Champions.

Jean Todt, who has just taken over the management of Peugeot Talbot Sport, presents the 205 Turbo 16 entered in the 1984 World Rally Championship.

At the head of Ferrari

In 1993, Peugeot Talbot Sport decided to leave endurance racing to become an engine manufacturer for the McLaren team in Formula 1. On 1 July 1993, Jean Todt also joined F1, but with Scuderia Ferrari, which had not won a Grand Prix for nearly three seasons (GP Spain 1990). Luca di Montezemolo, the new Ferrari boss, gave him carte blanche to turn the situation around and Jean Todt became the first foreigner to head up the sports management of the famous Scuderia. Within a year, Ferrari was back on top at the 1994 German GP and Todt worked hard to bring the Maranello team back to the top. It finished third in the 1994 and 1995 World Championships, then second the following three seasons and was crowned World Champion in 1999, something that had not happened since 1983! Ferrari dominated Formula 1 without sharing and won all the World Championships until 2004. At the same time, the young German prodigy Michael Schumacher, with whom Jean Todt is very close, won the Drivers' Championship from 2000 to 2004. In 2001, Jean Todt was appointed head of all the Ferrari-Maserati group's sporting activities, then Managing Director of Ferrari SpA in 2004.

His experience of racing as a co-driver in rallies has served Jean Todt well in his various roles as team manager.

Recognition by the FIA

On 18 March 2008, he left Ferrari for good after contributing to 14 world titles and 106 Grand Prix wins. In April of the following year, he took over the presidency of the "e Safety Aware" organisation which promotes new automotive technologies and intelligent vehicles. On 23 October 2009, he was elected President of the Fédération Internationale de l'Automobile, against his former accomplice at Peugeot Talbot Sport, the driver Ari Vatanen, and with the support of the previous FIA President, Max Mosley. His four-year term of office was renewed without competition on 6 December 2013 and again on 8 December 1917. In April 2020, Jean Todt announced that he would not be seeking a fourth term at the head of the FIA. There is no doubt that he will remain a strong personality in motor sport who will have contributed to representing the colours of France at the highest level. 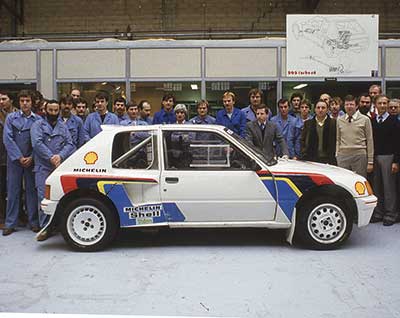 Presentation of the Peugeot 205 Turbo 16 of the 1985 season. Jean Todt can be seen on the windscreen and Jean-Pierre Nicolas on his left.

In parallel to his career as Director of the Fédération Internationale de l'Automobile (FIA), Jean Todt has been involved in many humanitarian associations. On 29 April 2015, the United Nations General Secretariat appointed him Special Envoy for Road Safety. He is also a member of the Académie des sports and the Académie des technologies. In 2010, he is one of the founders of the Brain and Spinal Cord Institute hosted by the Pitié-Salpêtrière Hospital in Paris. He is also a member of the board of several humanitarian organisations such as the Suu Foundation in Burma and the UN International Peace Institute. He was awarded the Gold Medal of Youth and Sports in 1987, was named Doctor Honoris Causa in Engineering by the University of Florence in 2004 and elevated to the rank of Grand Cross of the Legion of Honour in 2011.

An astonishing record of achievement