On 29 March 1984, 200 examples of the Peugeot 205 Turbo 16 were assembled on the Mortefontaine test track for FISA Group B homologation.

The Peugeot 205 T16 was designed from the end of 1981, when Jean Todt took over the management of Peugeot Talbot Sport. The initial programme, which was called "Group B Project", then "M24 Rally" when it was more advanced, finally became the 205 Turbo 16 under the technical direction of Bernard Perron. The initial specifications included 4-wheel drive, a mid-engine and bodywork similar to that of the production 205 that Peugeot would soon market.

In December 1981, Peugeot-Talbot Sport was formed with the aim of organising the competition programmes of both the Peugeot and Talbot brands. In December of the following year, PTS announced its intention to enter the World Rally Championship in 1984, in Group B. This category, created in 1982, was reserved for modified sports cars produced in 200 units according to FIA regulations. The vehicle chosen by PTS for this challenge was the 205 Turbo 16, derived from the GTI.

On 29 March 1984, 200 examples of the Peugeot 205 Turbo 16 were assembled on the Mortefontaine test track for FISA Group B homologation.

On 23 February 1983, the Peugeot 205 Turbo 16 was officially presented at the manufacturer's Paris premises on Avenue de la Grande Armée. Over the following months, this prototype underwent numerous tests, on asphalt and on gravel, under the guidance of the driver Jean-Pierre Nicolas and with the occasional help of Jean-Pierre Jabouille. The construction of the 200 cars required by the Fédération Internationale du Sport Automobile for the Group B homologation of the 205 Turbo 16 started on December 1st 1983 in the Poissy factory. At the beginning of March 1984, the 205 T16 was exhibited on the Automobiles Peugeot stand at the Geneva Motor Show. The following April, a press release issued by Peugeot Talbot Sport announced the following information: "Twenty-seven months after the first stroke of the pen, the Peugeot 205 Turbo 16 was homologated in Group B as of April 1st". On Thursday 29 March, the 200 vehicles built in just three months were lined up on the track at Mortefontaine, in the Oise region, for inspection by members of the FISA and the BPICA (Bureau Permanent des Industriels et Constructeurs Automobiles). To celebrate this event, a large number of the staff who collaborated on the project are present. On that day, as if in a blink of an eye, the 2,000,000th Peugeot left the production lines of the Mulhouse factory and it was a red 205 GTI... The next day, the 20 "Evolution" cars intended for competition, also built in Poissy, were approved in their turn. 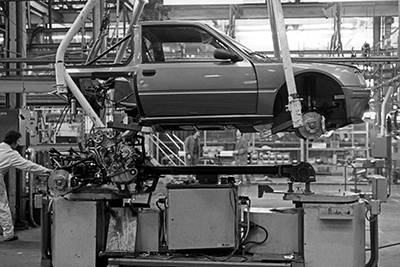 The 205 T16 under construction in the Poissy factory. In this period photo, the engine and all-wheel drive system that will be installed can be seen in the background.

A model of balance

Although the Peugeot 205 Turbo 16 was designed in parallel with the production model which was launched in February 1983, this sporty version has few technical similarities with its 205 cousin, both in terms of the chassis and the mechanicals. While at that time many manufacturers adapted existing bodywork for Group B homologation with sometimes unfortunate aesthetics, Peugeot managed to design a car of rare elegance. Externally, the general shapes and volumes have been retained, some of which have been enlarged.  The characteristic bulge at the rear wheels with the engine cooling air inlets is immediately noticeable. The chassis architecture consists of a self-supporting shell made of pressed and welded steel elements, onto which are grafted tubular structures that house the suspensions. Most of the bodywork is made of laminated plastic, except for the doors which are made of sheet metal.

The transverse engine, with its aluminium alloy block and cylinder head, is mounted in a rear mid-engine position, inclined at 20° to the rear. It only delivers its full power (200 bhp) from a speed of 4,000 rpm, when the turbocharger is triggered. It is worth noting that the Evolution race version delivers 340 bhp for the same displacement, while the 1985 Evolution 2 version offers 430 bhp. The TJ gearbox is a descendant of the one used in the Citroën SM a decade earlier. The transmission is permanently four-wheel drive with 35.5 percent of engine power distributed to the front and 64.5 percent to the rear. The system is complemented on each axle by a ZF limited slip differential (17% front and 45% rear). The clutch is a Fichtel & Sachs dry single-disc diaphragm system.